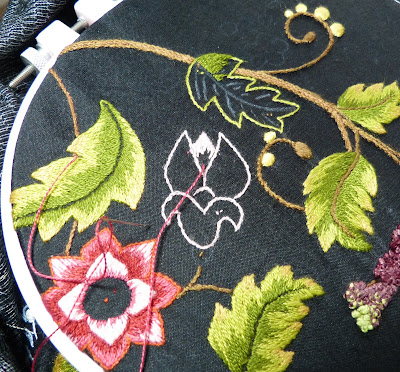 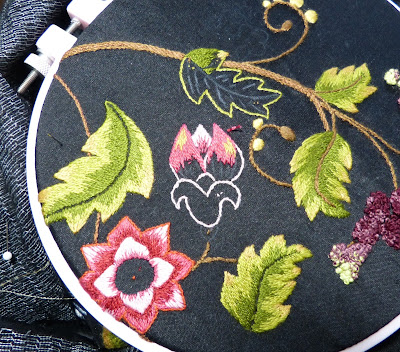 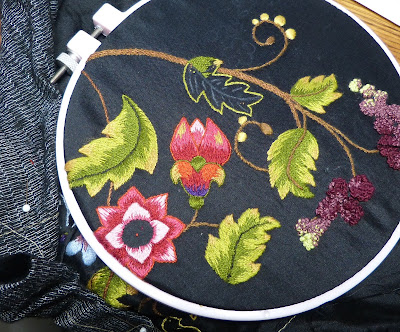 And the finished bud. I'm not too sure I like the color scheme, but well, there it is. Notice the unfinished leaf above the bud? It will stay like that for a while, as I'm almost out of thread for it. Darn it. There are three small pink buds that need to be embroidered; you can see them in the previous post, outlined in yellow. I will complete those before I order any more thread, just in case I have to order more of the pinks.

In other news: the sale of our house closes on Monday, and we move out on Tuesday. There are still several boxes to pack, and at least one trip to the dump to get rid of excess trash. Our receptacles are almost filled and we just had trash collection yesterday. It's a wonder that I'm getting any embroidery done, as I'm usually too distracted to concentrate on it. But we got quite a bit done today and are on track to being completely packed in time. We may even go whale watching on Sunday. The last time we went out all we saw were a few dolphins, so we were give free tickets for another trip. Lately there have been sitings of blue whales, lots of common dolphins, and occasional minke, orca, humpback whales and a bottlenose dolphin or two.  Even if we don't see any whales or dolphins, it will be refreshing to get out on the water, and free is always good!

Colorado won't have whales, but it will have grand babies!
Posted by Cynthia Gilbreth at 6:55 PM 4 comments: 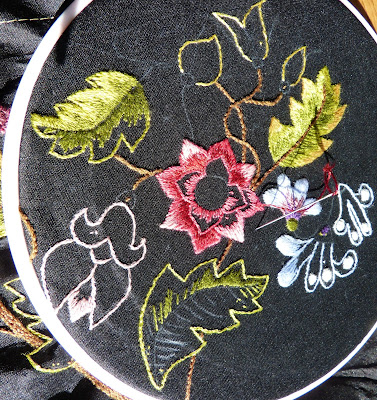 Since I've been home in California, waiting for the sale of our house to complete, I've been working on the Embroidered Silk Evening Bag that somehow I forgot to pack away. And I'm so glad I forgot this! Now I have some embroidery to try to work on while I'm here. Here I'm working on the large pink flower. 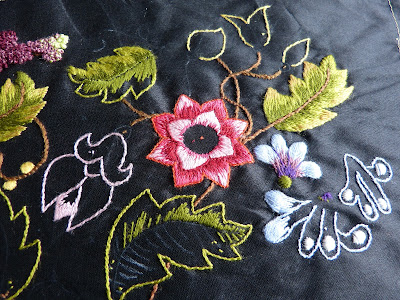 I've finished the petals, but the center will have to be finished much later. It is made of Ghiordes knots with beads surrounding it, so it would be best to get the flat embroidery out of the way before I start adding the structural elements. 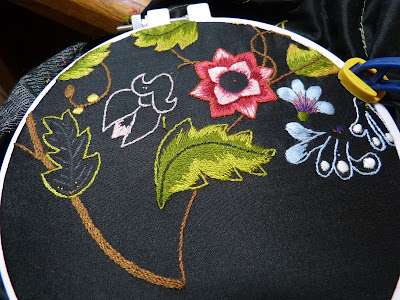 So I've finished the upper leaf to the left of the pink flower and made a great start on the one just below. But see the blue petals on the right? I had to stop because I ran out of silk. Oh, the bane of all kit workers!

I noticed that there were several other colors that were running low and in danger of running out. Last week, I drove to our local needlework shop which supposedly has all of the colors of Au Ver a Soie, Soie d'Alger in stock, and out of five different colors that I needed, only one was in stock. So disappointing! I ordered the rest from Hedgehog Handworks, who shipped them a day later. This is good, right? Well, maybe not so much. I had just cancelled the Post Office forwarding address and was afraid they would go to Colorado. But luckily, the Post Office was right on the job and cancelled the forwarding pretty quickly, and my threads arrived in California.

I've moved on to the large pink bud, to the left of the flower, and will show you that in the next post.

Happy Independence Day and Some News 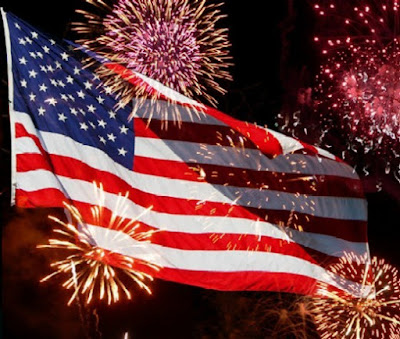 Today in the US it is Independence Day, celebrating the day when the American Colonies declared independence from Great Britain. We generally celebrate with a reading of the Declaration of Independence, outdoor fun, barbecues, and of course, fireworks. Our local community center is gearing up for rides, games, and bands, culminating in the fireworks at 9 pm. Luckily, we can see them from the front yard, so no need to go down to the crowds. We will be firing up the grill later for our ribs and a nice relaxing afternoon of grilling and eating. We have started watching the AMC Television series, Turn, which is about George Washington's spy network. We need to get through the first season on Netflix before watching the second season, which I recorded on our DVR.

I mentioned that we were selling our house and moving, so now I'll explain a bit more about it. Last summer my daughter, who lives in Colorado, called us to inform us that she would be expecting her baby in March of this year, so Mr CS and I looked at each other and said, well, we're retired, let's move to Colorado!

We decided to build a new house in Colorado, and have rented an apartment for the interim period. I wanted to be in Colorado to help my daughter with our granddaughter in the months immediately after the baby was born. 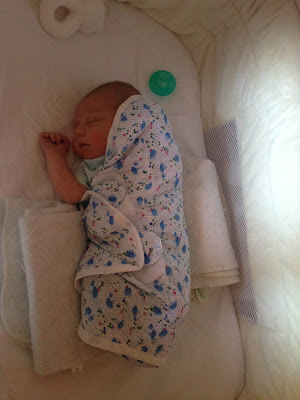 He showed up on March 20 and has been charming the pants off me and everyone else since then. Here he is in the swaddle cloth I made for him.

In the last post I mentioned that we were to move out of the house by June 30, but that deal fell through. So we put the house back on the market and got an even better offer! Now we need to move by July 29, and are anxiously waiting for all contingencies to be cleared so we can make some final arrangements. 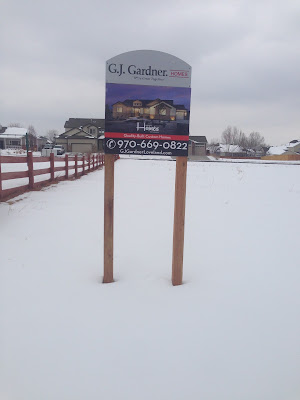 A somewhat forlorn image of our lot back in March. We hope to break ground on the new house around August 1, and move in by the end of January. We'll see how that works out! 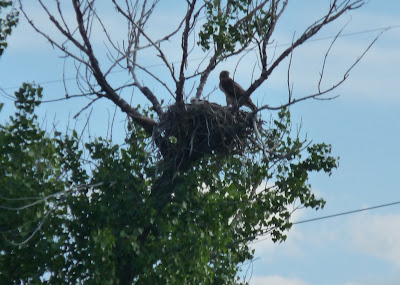 Our neighbors, a bald eagle and her chick. I'm sure that by the time we get back to Colorado the chick will have flown off. The nest is about a ten minute walk from our lot. I will have regular updates to the building progress, and may even start a separate blog for it.

Happy Independence Day to all my American readers!