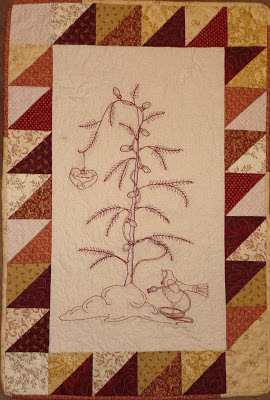 Thanksgiving is now over and the Christmas Season has begun! Not that I do a great deal of Christmas sewing, but at long last I have finished this little wall hanging quilt to hang on my mother's door.

This little project was purchased at the International Quilt Festival in Long Beach this summer, and is designed by Carriage Country Quilts.  Unfortunately, I couldn't find this pattern after a cursory look at their website. It's from 2011, so maybe it's been discontinued. The kit that I bought has more of a "country" feel to it than what is shown on the package. By that I mean my kit had more shades of brown in it, as opposed to clearer reds. However, I like it. I made a few small changes, I didn't embroider the outer border, and I added a few beads here and there for sparkle. I also used several different shades of brick red for the embroidery, to try to add a bit of dimension to it. I'm not sure I succeeded.

I love quick and easy projects like this one. They seem to be made just for me. I just now need to get it to my mother's room to hang on her door. 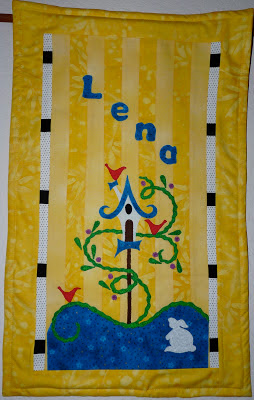 She still has this hanging on her door, which is obviously a bit out of season. I made this in May, 2010, so it is definitely time for an update.

I'm off to Joann's today to gather materials for a Christmas gift for my granddaughter, Bridget, who is now 5 1/2 years old (I can't believe it).

I hope you have a great weekend stitching away, putting up the Christmas tree, and eating Thanksgiving leftovers (for those of you in the US). My favorite is stuffing with turkey gravy thinned with turkey stock, sort of a stuffing soup.


Posted by Cynthia Gilbreth at 9:34 AM 5 comments:

A Bit of Smocking on the Road 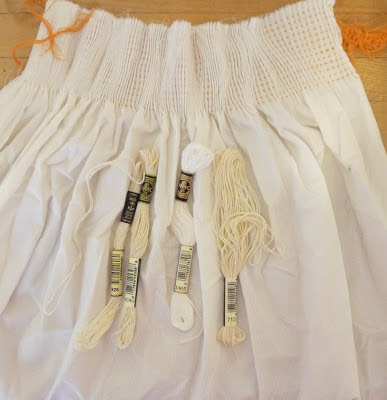 No, I haven't fallen off the face of the earth, but have been terribly busy with all sorts of non-stitching activities. I haven't been able to accomplish enough on one project to make even a measly post until now.  My niece is getting married next June, and last weekend I took a road trip with my sister and her daughter's future mother-in-law to the Sacramento area to attend a bridal fair at the wedding venue.  Well, wouldn't you know I really needed something to do while sitting in the car as I can look at women's magazines only for so long without going crazy. At our local SAGA chapter's banquet in September, I won a lovely AS&E kit of a romper in ecru baby wale corduroy. Pre-pleated, even! The kit was for a project in Issue 40, which I don't have. 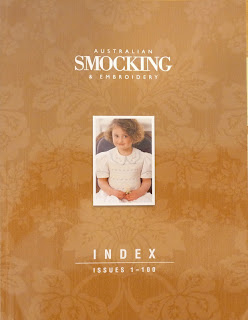 Luckily, this handy index showed up in the mail with all of the magazine's projects listed. 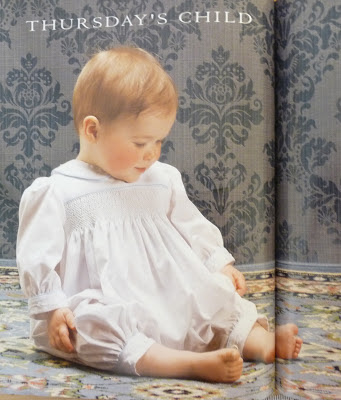 There were several romper patterns, but at least this one I had, from Issue 93. The garment is made up in white cotton piqué, only slightly lighter in weight than the kit fabric.  You can see the various threads I was considering in the first photo. I decided on Anchor 962, which was a perfect match for the fabric. 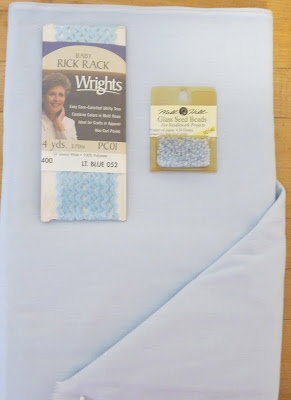 I found some blue batiste for the piping, matching beads, and even some baby blue rick rack. I'm undecided on whether to make piping or use rick rack, but am leaning toward the piping. 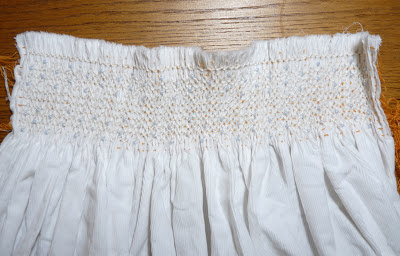 Finished smocking, terrible photo. The orange pleating threads do tend to dominate, don't they? My sister was looking at this, trying to tell me nicely that the orange sort of clashed with the ecru threads, fabric and blue beads. I finally realized she had no idea of what she was looking at and explained to her that the orange comes out before I sew the garment together. She was certainly relieved, and probably thought that older sister was losing what little design sense she ever had.

Now I'll tell you my nifty trick for adding beads to smocking while riding in a car. Take a small piece of cellophane tape, roll it into a tube and press one side into the bead package, so that many beads adhere to the tape. The stick the beadless side of the tape to the inside of a plastic zip loc bag, and you have beads safe and sound. If they fall off while you try to grab them with your needle, they stay inside the bag.

The redecorating in my house is taking much longer than I thought it would. The sewing room is painted, and I've moved back in with my sewing machine and a few other things. I've heard through the grapevine (Mr. California Stitching, actually), that my closet doors are close to being installed. Then comes carpet, closet organizer, and finally, unpacking the fabric. Someday...