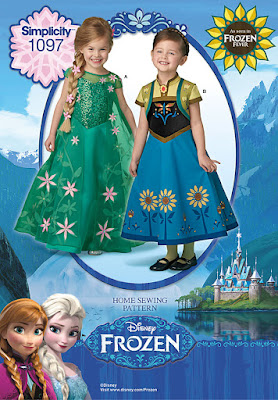 Or the Awful Elsa, as I call it. Mainly because of the terrible to handle polyester chiffon from Joann's. My granddaughter, Bridget, clearly specified the costume from "Frozen Fever", not "Frozen".  For those of you who might not know, "Frozen Fever" was a short that was aired with the live action "Cinderella" earlier this year. 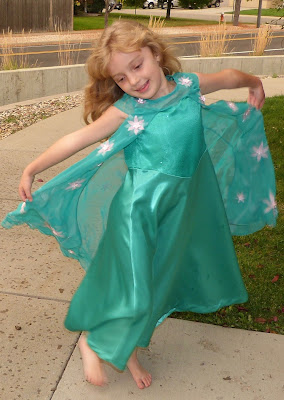 The bodice isn't quite as glittery as the pattern specifies, but that is because I didn't purchase the sequined fabric. Instead, I opted for a glitter covered satin, at about $20/yard cheaper. As you can see, Bridget doesn't mind a bit. 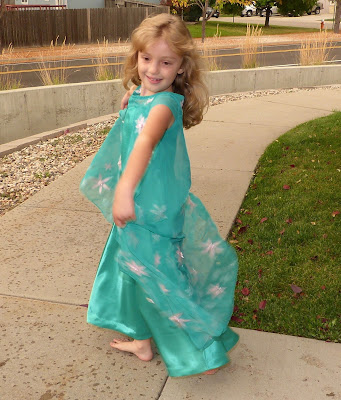 The chiffon was truly awful to handle, as it doesn't take a press at all and tends to pucker, especially on the hemlines. But I managed to slog through it, and she does love it. Now she wants me to make Anna, but that will have to wait. I wish I had made it first as it would have been a lot easier, as I could have made it from much easier to handle cotton.

Some construction details: I looked up how to hem very sheer fabrics and got some good ideas from Threads website. I stitched 1/2 inch from the edge, then folded the fabric to the inside and stitched again, and trimmed the fabric close to the stitching. If I held the fabric slightly while feeding it through the machine, it didn't pucker (much). The pattern called for finishing the neck edge with purchased bias binding, which was impossible to find in this shade of green. So I made my own, easy enough, except that it doesn't take a crease. It was very difficult to sew and is a bit puckered at the top, but hey, it's a costume.

Actually this is more like a prom dress for a little girl. I hemmed the satin skirt with a bias facing, which eliminates the puckering that occurs with a turned up hem on such a flared skirt. It took longer to do, much was easier. I really hate fighting with fabric; I never seem to win.

On another note, I just came back from the third Smock Across America SAGA retreat in Valley Forge, Pennsylvania. Mr California Stitching came with me and and we drove down to Washington, DC for a few days museum hopping. I'll report on the two projects from the retreat as I work on them.   My next project is another dress for Bridget, this one with a jacket, and I will try to post on that as I go. It's pretty complicated and will consist of some precision sewing. It will be fun!