It is late Sunday morning and I'm feverishly working on my Smocked Hanger Cover, but I thought I would take a break and share a few photos from the LACMA exhibition I recently attended and wrote about in the last post.  These photos are from the first part of the exhibit as you walk into the pavilion, and consisted solely of white dresses. As you probably know, white dresses were quite a status symbol as they showed the world that the wearer was rich enough to wear a dress that would show dirt quite easily and therefore be cleaned often. I'm presenting them in chronological order, but my details are sketchy, as I didn't photograph the descriptions nor did I buy the book. Big mistake! I may yet buy it off the website. 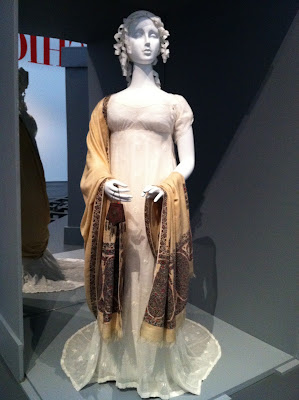 This is a great example of an empire dress, named for Empress Josephine, who popularized the style. That places it roughly at the beginning of the 19th century during the time of Napoleon. The scarf is silk and from Turkey. I can't imagine walking outside in this dress and getting that train dirty! 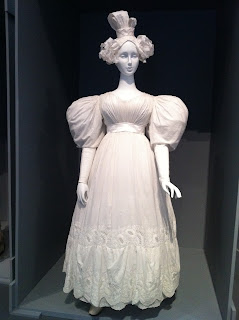 This dress is from roughly the first half of the 19th century, and has some amazing embroidery on it. I believe the embroidery is all hand worked, as the machine embroideries didn't become common until later. 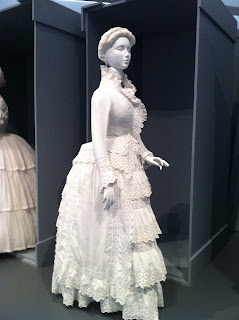 This is from around 1860-70, due to the bustle which became fashionable around that time. Many of the clothes were made by the early sewing machines, and I think that the embroideries on this dress were made by machine.

I hope I haven't made too many mistakes on the descriptions of these dresses. Have a great Sunday!
Posted by Cynthia Gilbreth at 12:15 PM